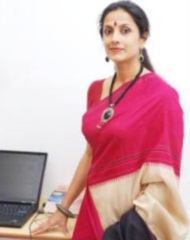 The principal founder of Deens Academy, Principal Shanthi Menon embodies the spirit of this school, at Whitefield, Bangalore. Her passion for education and vast teaching experience put her in a unique position to continually steer Deens to the highest echelons of educational excellence.

Inspired by the conviction to make a change in the field of education, Shanthi Menon, a university rank holder from Stella Maris College, Chennai, acquired a degree in education after completing her graduation in English Literature. The initial years of a nearly two-decade-long career were spent at some of India’s most prestigious educational institutions including the Bhavan’s schools in Chennai and Hyderabad, even while Ms. Menon pursued a post graduation from the University of Madras.

Has Featured in the Mentor Magazine – Vicissitude 2013

AWARDS RECEIVED BY DEENS ACADEMY UNDER HER LEADERSHIP

Daughter of the eminent, Dr. E Sreedharan, the Metro Man of India and wife of Mr. Hari Menon, Co-Founder CEO of Big Basket.com and ex-CEO, India Skills, a pioneering vocational skills development company, Shanthi is a passionate home maker and the mother of 3 sons.

Running parallel to her chosen career is her talent in the field of dance. A trained Bharatanatyam and Mohiniattam dancer, Ms. Menon has performed extensively and has to her credit many choreographies and events which have won her many laurels.

She has been an auditioned A- grade artist at Doordarshan, Chennai. She has also to her credit some modelling assignments and comperes dance programmes and events.

Shanthi is also trained in carnatic music and is a creative artist who gives life to Tanjore paintings as well.