August 24, 2015 Comments Off on Girls team wins football championship at the Volksfiesta 2015 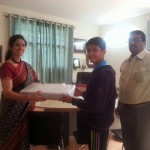 Deens Academy congratulates Harshil Kabduwal of Grade 8 A who received a laptop as a award for winning the third place at the National Astronomy Olympiad. END_OF_DOCUMENT_TOKEN_TO_BE_REPLACED

August 24, 2015 Comments Off on Champions Rolling Trophy At Expressions 2015 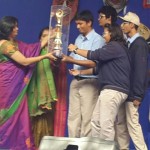 ASSET Stands for Assessment of Scholastic Skills through Educational Testing. It is a scientifically designed, skill-based assessment test. Rather than testing rote learning, through multiple-choice questioning, it focuses on measuring how well SKILLS and CONCEPTS underlying the school syllabus have been learnt by the student. The test provides information on the strengths and weaknesses of individual students and also entire ... END_OF_DOCUMENT_TOKEN_TO_BE_REPLACED

January 22, 2015 Comments Off on Life Time Education Award by IIEM

Chanakya Award for The Best Principal 2013

September 22, 2013 Comments Off on Chanakya Award for The Best Principal 2013

Contribution to society, on the occasion of Women’s’ Day, 2011

Award of recognition for her contribution to society, on the occasion of Women’s’ Day, 2011, by His Excellency Dr Joseph V G, Honorary Counsel of the Republic of Maldives END_OF_DOCUMENT_TOKEN_TO_BE_REPLACED