A story by Inba Nagarajan- Grade 5

This story is based on an event that took place thousands of years ago in the period between 430 BC – 404 BC in ancient Greece. There are many unspoken heroes in the history of Greece, one such hero was the “Thief of Hearts”. 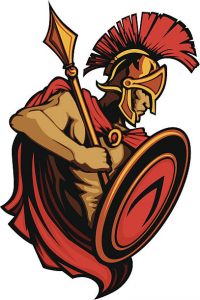 During this period Greece was a super powerful kingdom. Two of its major cities Athens and Sparta were always at loggerheads because of the unfair behavior of the Athenians towards Spartans. Athens wanted to control Spartans. That is how the Peloponnesian war began. The story is based on a mercenary in the Peloponnesian war.

As the war became fiercer and fiercer, the Spartans needed more soldiers. They kept searching for ways. One of them was mercenaries,

Self-taught soldiers who would be willing to fight for some money. The ‘Thief of hearts’ was not what one would call a well-known mercenary. No one knew where he came from, who he was and multiple other questions. He wore pitch black pants and a grey shirt under a suit of bronze armor. At first, they did not think much of him. but they were wrong. When Sparta hired him, he destroyed anyone who came in his path. The Athenians needed to do something about him.  They sent multiple counter mercenaries but to no avail. Each of them slayed by his sword one by one. Never leaving a trace. Athens commanders retreated in fear when they got the news that the ‘Thief of hearts’ was nearby. They knew that when he attacks, no one lives to tell the tale.

When the ‘Thief of hearts’ was twelve years old, his little brother Heles was abducted by the Athenian soldiers and now the news is that he is enslaved in Athens. So ‘Thief of hearts’ was here on a mission to free his brother and take him back to Sparta. No one knows his real name, because since the young age he had exhibited a heart of gold and was always around and willing to help anyone and everyone in trouble. That’s how his name became the ‘Thief of Hearts’

There was an important fort, the Athens knew that the ‘Thief of hearts’ will try to raid according to their spies. They moved all sorts of backup ranging from archers to elite soldiers. A few days later the fort was burnt. Later there was a report that a civilian saw an Athenian elite soldier get into a fight with his partner which proved that the ‘Thief of hearts’ was still disguised as an elite soldier. They had to do something to catch him, they tried everything. None of them worked

As time was running out, ‘Thief of hearts’ bravely entered the palace to look for  his brother but to his utter disbelief his brother had become one of the top soldiers in the enemy army, on seeing him, his younger brother was overcome with joy but at the same time he had to do his duty, he tried to imprison the intruder, after a brief clash of swords, without harming his younger brother but with a heavy heart, “The thief of Hearts” scaled the walls of the castle and fled to his country in a ship, with sadness and contentment.